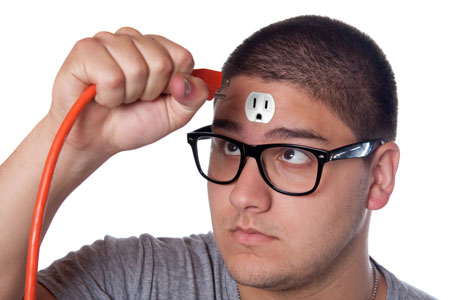 EHS deniers claim that studies show so-called victims cannot discriminate between EMF and non-EMF environments. Other researchers are able to elicit objectively observed changes following exposure in reactions of the pupil, changes in heart rhythm, damage to erythrocytes, and disturbed glucose metabolism in the brain.”[i]

EMFs are Class 2b Potential Carcinogen

That WHO classification of EMFs as possibly being carcinogenic came out of observations that childhood leukemia clustered around EMF exposure. Researchers concluded that 1 to 4% of all childhood leukemia cases could be attributed to the effect of electromagnetic fields.[iii]

In 1970, the Soviet Union reported what we would now call EHS in radar station operators that they called “microwave” syndrome. Far from being ionizing radiation, microwave wavelengths are 30 cm to 1 mm, which is shorter than radio waves, but longer than infrared light. The shorter the wavelength, the more energy an EMF contains. Microwaves contain less energy than visible light and infrared light, yet contributed to fatigue, dizziness, headaches and insomnia in military exposed to theses non-ionizing fields. [iv]

In vitro examination of EMF on DNA has yielded damage in some studies and no damage in others. It’s not clear whether the studies that failed to find damage isolated non-damaging EMFs, or they were simply setup with faulty equipment or measurements such as distance from source. Those studies that do show EMF altering DNA are the basis for declaring that non-ionizing radiation can cause cancer.[vi]

Is EHS a Nocebo?

Self-reported EMF exposure sickness has reached critical mass in that the World Health Organization has tasked itself with creating protocols for amassing evidence to separate correlation and causation of illness. Devices of concern include: “magnetic resonance imaging, diathermy, radiofrequency ablation), industry (e.g. heating and welding), domestic appliances (e.g. baby monitor, WiFi), security and navigation (e.g. radar and RFID) and especially in telecommunications (e.g. radio and TV broadcasting, mobile telephony).” The study will differentiate between nocebo effect and causation. If, for example, all EMF sensitivity cases turned out to be driven by belief rather than exposure, then the results would imply the following portions of populations are actually imagining rather than experiencing biological effects: [vii]

The large-scale WHO study is broken into six domains with eight questions per domain, including:

With reports as high as 10% of a population attributing illness to exposure to EMFs, the WHO’s investigation validates that people are getting sick in large numbers. For the studies in which subjects failed to identify EMF exposure are borne out, the WHO will have to conclude that 10% of Germany and 3.2% of California’s populations, for example, are suffering from hallucinatory false attribution of exposure to EMFs with significantly adverse symptoms.

A 2014 study proposed using blood biomarkers as an EHS diagnostic tool. Those researchers found that those suffering from EHS has simultaneous “metabolic pro-oxidant/proinflammatory alterations … with distinctively increased plasma coenzyme-Q10 oxidation ratio.” They also “identified significantly altered distribution-versus-control of the CYP2C19*1/*2 SNP variants …, and a 9.7-fold increased risk (OR: 95% C.–74.5) of developing EHS for the haplotype (null)GSTT1 + (null)GSTM1 variants.”[viii] In other words, EHS people had blood biomarkers, and certain genes predicted EHS illness in response to exposure.

Fibromyalgia Wasn’t Recognized as “Real,” Either

A 2020 study of fibromyalgia and electromagnetic sensitivity patients demonstrated that the population exhibiting both illnesses shared metabolic profile anomalies, consisting of “higher levels of glycine and pyroglutamate, and lower levels of 2-hydroxyisocaproate, choline, glutamine, and isoleucine compared to healthy subjects.”[ix]

Alternatively, the EMFs are not the source of illness, but the cause of illness is still external and not nocebo. For example, flickering from alternating current has negative biological effects. Studies that expose subjects to EMFs can do so without exposing the subjects to associated light flicker, which could account for the illness coming from an external source, and the subjects not recognizing the presence of the cause. The misattribution of illness to EMF rather than another consequence of electrical device EMFs still leaves open the possibility that something about electrical devices is causing biological harm. Were the actual cause to be light flicker, for example, EMF mitigation would cause flicker mitigation, and thereby correlate with less illness.

Neither nocebo nor misattribution accounts for the biological intrusion of EMFs into the body causing cellular and genetic damage. Non-ionizing EMF damage to biological tissue is not disputed, so it is therefore surprising that those suffering from self-reported EHS would be unable to detect EMF nearby. Such “canaries” that appear to be more sensitive to EMF damage than the rest of the population associate exposure to electrical devices emitting EMFs with onset of their symptoms. Since non-ionizing EMFs do cause biological damage, another hypothesis makes even more sense than millions of people all experiencing the same nocebo effect. That is that the studies that hid the source of EMFs from subjects inadvertently attenuated the EMFs that would have caused damage were the devices in plain sight.

Groups of people agreeing that their illnesses arise from EMF exposure gather on social media and flee to “national radio quiet zones” established around sensitive telescopes. The wireless, cell phone and electric device ban that protect these telescopes from ground noise are oases of relief to EHS immigrants.

The 1996 Telecommunications Act forbids communities from exercising regulations against the placement of mobile cell phone towers for the purpose of protecting public health. The act explicitly denies local regulations banning towers so long as FCC EMF emission regulations are met. The FCC claims not to be a health authority and so submits to the IEEE, which bases its standards of EMF health on thermal and ionizing standards. Towers went up, people got sick, towns sued the FCC, and the Supreme Court upheld the 1996 law as a win for the telecommunications industry.[xii] The court held that the citizenry’s health is specifically excluded from consideration when siting mobile phone towers, and that local zoning boards have no right to object to telecommunications industry tower installations.

But fear not, because the FCC maintains a crisis management center that citizens can call 24/7 at (202) 632-6975 to report any radiofrequency hazard threatening public safety or health.[xiii] The operators on that line will be happy to inform you that the IEEE says that the towers nearby that correlated with your illness cannot be the cause as they emit microwaves and radio waves but not ionizing radiation with thermal or DNA altering properties.

The only possibility that there is not a physical problem making people sick is if somewhere between 2% to 10% of each country’s population is experiencing the same nocebo effect across the world. They self-report association of illness with EMF exposure. Given that non-ionizing EMF create biological damage, there is more reason to look to physical rather than worldwide mass experience of the exact same hallucination of illness.

Electrical Devices are the Common Denominator

The EMF hypothesis still has room to be incorrect, but the evidence is pointing to something about electrical devices that causes dizziness, brain fog and Alzheimer’s. The cause does not have to be EMFs; it could be flicker, dirty electricity or some unnamed phenomenon. Outside of the collective unconscious hosting simultaneous nocebo hallucinations, the physical presence of electrically powered devices is common to all reported cases. Whether these devices are radios, home wireless phones, cell phones or military radar installations, millions of people are sick in the presence of electrical devices. If they are canaries whose bodies alert them of danger while the rest of us blithely hold cell phones crushed to our skulls causing glioblastoma, then they are just early in reporting symptoms that eventually all of us will experience with enough exposure. EMFs are a class 2b “possible carcinogen,” which points squarely at physical cause for physical effect rather than blaming the victims for their illnesses.

Is EMF Mitigation a Scam?

Some manufacturers of electrical devices offer EMF mitigation usually in the form of redirecting waves away from users in a process similar to noise cancellation in Bose headphones. Recently in an industry with which I am very familiar, an argument arose that protecting users from EMFs was just a scare tactic to attract buyers to a bogus and unnecessary feature. With millions of people reporting illness when exposed to electrical devices and power transmission, the protection of biological tissue from EMFs is hardly a cynical sales tactic. The nocebo hallucination is astronomically unlikely in numbers as large as 10% of any given population. The EMFs are damaging tissue. People are reporting illness. That some scientists couldn’t associate EMF producing devices with subject’s ability to detect harm is more likely to mean that those studies were poorly designed, or that the attempt to hide “real” and “placebo” EMF emitting devices from subjects accidentally resulted in protecting the subjects from the damaging phenomenon they emitted.

[i] Electromagnetic hypersensitivity–an increasing challenge to the medical profession

[vii] The effects of radiofrequency electromagnetic fields exposure on human self-reported symptoms: A protocol for a systematic review of human experimental studies

[ix] Metabolomics and psychological features in fibromyalgia and electromagnetic sensitivity

[xii] THE TELECOMMUNICATIONS ACT OF 1996